Powering your IT needs

How to Calculate Dividends for a Sacco/Microfinance Bank

How to Calculate Dividends for a Sacco/Microfinance Bank

In microfinance or a Sacco, dividend is the sum of money that you pay regularly to your members out of your profits or reserves.

You may pay dividends monthly, quarterly, semi-annually, or annually depending on the policy that you’ve set in your Sacco. However, in most cases, dividends are paid out only once a year during the Annual General Meeting(AGM).

In other words, a dividend is like a share of profit that you give to the members of a Sacco to encourage them to save and invest their money.

In this guide, you’ll use the flat rate and pro-rata basis methods to calculate dividends in a Sacco.

Before you begin, ensure you have the following:

The first method that you can use to calculate dividends in a Sacco is the flat rate method. This formula is quite straightforward. You simply take two things into consideration:

Then, to get the dividends for each member, you simply use the formula below:

For instance, ABC Microfinance Bank declared the total dividends to be issued to members as $400,000/=.

To calculate John Doe’s dividends, simply use the formula outlined above:

Dividends = Shares held by individual member / Total shares held by all members X Amount to be issued as dividends:

Pros of the Flat Rate Method for Dividends Calculation

Cons of the Flat Rate Method for Dividends Calculation

The Pro-rata method of calculating dividends in a Sacco involves distributing profits in equal proportion.

In other words, this method allows you to allocate periodic interest rates to members on a monthly basis.

To use this method, you must convert the annual rate of dividends to a monthly rate.

Taking our example above, the ABC Microfinance bank had total outstanding shares of $8,000,000/= at the end of the year.

The total dividends declared by the officials at the end of the year was $400,000/=.

If you look closely at those figures, the company was issuing around 5% as dividends for that year as shown by the formula below.

In order to use the pro-rata basis method to calculate dividends for the Sacco members, you must convert the annual rate of 5% to a monthly rate by dividing the rate by 12 months:

So, this means each Sacco member will get dividends at a rate of 0.42% per month.

Now to get the dividends for each month, you should take the closing balance at the end of each month for each member and multiply it by 0.42%.

Now, the earlier example in this guide indicated that John Doe had $150,000 at the end of the year.

In order to get his dividends for the year, you need to determine his monthly closing balances from his statement.

The photo below shows John Doe’s closing balances as at the end of every month. To calculate dividends for each month, you simply take the monthly rate calculated earlier as 0.42% and multiply it by the closing balance of the month as shown below:

For instance, the closing balance for John Doe at the end of January 2019 was $25,000, to get dividends for the month, you simply use the formula below

Please see the screenshot below: 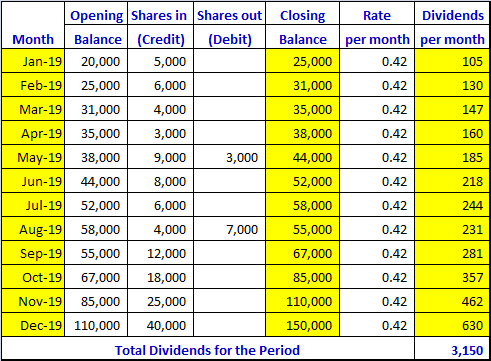 As you can see from the image above, John Doe earned total dividends of $3,150/= compared to $7,500/= that he could have earned from the flat rate method for dividends calculation.

In this guide, you used the flat rate and pro-rata basis method to calculate dividends for microfinance, Sacco or a bank.

Since each method requires an accurate statement for each member, you should consider purchasing a bank software that takes care of the member’s shares purchases, transfers, and redemptions.